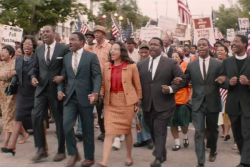 I always listen to classical music on my way home from the movie theater. It helps me process what I have seen.

After a movie like Selma, at the end of a year like 2014, I had to take the long way home to organize my thoughts. So, without any spoilers, here’s how this movie helps all of us understand the path we’ve just trod in 2014, and the one ahead.

There is a scene in Selma that shows a group of kids walking down some stairs and talking about their hair. It is a powerful moment in the film that spotlights the simple humanity of regular kids…having a regular conversation…while engaged in a regular activity.

In this scene, we are reminded of the universal nature of children. We are reminded that it is the decisions of adults that determine the reality our children have to live with.

In several nationally publicized incidents over the past few years, we have seen the conversation occasionally drift into a debate about who qualifies as a child. Some of these debates have further devolved into arguments in which some youth are categorized as adults because of their appearance and mannerisms, as opposed to whether they are old enough to fully engage the reality created by the adults around them.

Our country’s ability to move forward depends on our ability to see the full humanity and inherent value of all our children. This scene ensures that we never forget this.

“YOU ARE ALREADY PREPARED”

There is a scene in Selma where one of the main characters goes through a moment of self-doubt, and receives this line as part of some encouraging words from a friend.

The words exchanged in this scene teach us how the leaders of the Selma March understood their place in history…and how we should understand ours.

There is a scene in Selma where one of the main characters gets down on one knee. It is an act of humility and perspective that I hope lives in our minds for many months and years to come.

It seems like we had a nationally publicized “intercultural incident” every six weeks in 2014. After every “explosion of outrage”, we each make a decision about how we will respond…if we choose to respond at all. We act and react based on the truth we’ve come to believe. We each believe The Truth is on our side.

However, our standing on the spectrum of Truth is not determined by the volume of our voices. The critical question posed by this scene is: How do we find The Truth when we’re surrounded by high passions and low civility.

TOLD YOU, NO SPOILERS!!

Make sure Selma is a part of the first month of your new year…You’ll be making a resolution you can easily keep!