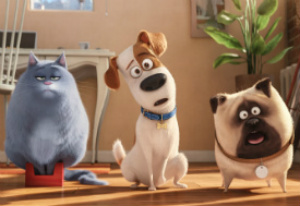 Running away from the long arm of law enforcement. Running to find the missing members of your family. A beautiful movie at the end of a tragic week.

I will try my best to do this without any spoilers.

I just saw the new animated film, The Secret Life of Pets, from Illumination Entertainment. After seeing the trailer a few months ago, I wasn’t sure if the movie was worth the $20 investment (the going rate for standard movie tickets in NYC).

But after a three-day marathon of death, blood, and sorrow that eroded the positive vibes from the three-day American Independence Day festivities which preceded it; I was in serious need of some mental and psychological self-care. 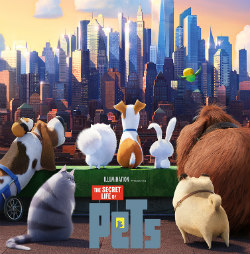 So, with a saddened heart and a tired spirit I made my way into an early matinée show, and had the rare privilege of watching a kids movie, during a summer weekend, less than three miles from Times Square…in a theater with only 20 other people. Sometimes the universe conspires in your favor!

The visual quality of this film is exceptional. As a resident of New York, I have to applaud the attention to detail that was paid to the scenery. You can tell someone who is either from NYC or lives in NYC had a key role in the production of this film. Stunning accurate representation of the colors and textures of the city.

The writing was also strong. This movie stands tall in the tradition of animated entertainment that blends visuals for kids with dialogue for grown-ups. Fortunately, I had a notebook and pen on hand (can’t pull out the phone to take notes during a movie…don’t be that person). And there were more than enough gems of dialogue to fill up a few pages. 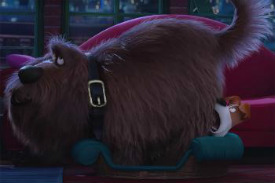 I found the introduction of Duke’s character to be a useful metaphor for the gentrification that has taken place in many neighborhoods within New York City and throughout cities in this country. Duke is introduced by Max’s owner Katie as his ‘brother’. A term of endearment. Familiarity. Trust. Respect. Shared values. Much the same way community redevelopment plans are presented to residents of working and middle-class neighborhoods by their local elected officials.

And for the first few minutes, it looked like Duke was willing to be a good sibling / neighbor / roommate. He was respectful of – an initially deferential to – the world Max had created. Duke took an old rug for a bed, and played the position of a newcomer. This parallels the way gentrification works in most cities. First, the struggling artists and new college grads begin to move into okay apartments in less-than-okay neighborhoods. They try to create a peaceful co-existence alongside the neighborhood’s long-time residents. And for a while it looks like a win-win situation for all parties.

But as Max finds out in this movie, things can change quickly. 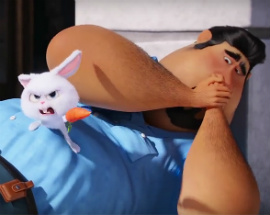 I find it interesting that the two Black actors whose voices are featured in this film are both comedians. I’m not sure what to make of the fact that one of the two was cast as a revolutionary gangster. With the peculiar irony that seems unique to Hollywood studio boardrooms; the character of Snowball – the anti-domestication, animal social justice warrior, underworld gang leader, and freedom fighting rabbit – is played by Kevin Hart.

Kevin Hart, who is currently the most productive and profitable Black entertainer in this country, and who arguably has brought laughter to more people of different backgrounds around the world over the past 3-5 years than any other American comedian. It is his voice as Snowball that emerges as the first distinctively Black American voice you hear in the film. And that voice is channeling the rage of a revolutionary / gangster.

Unless you have been walking around for the past few years wearing noise-cancelling headphones, you are aware of the ways in which words like thug and protestor have been used in some quarters of American society as pejorative synonyms for young people who are using their minds, bodies, and voices to provide a critique of the societal norms and systems which are harming Americans in black and brown bodies.

Watching the first few scenes featuring Snowball, both in the context of the past three days of national turmoil surrounding the killing of two Black American citizens by local law enforcement, as well as in the context of the last three years of tension around the relationship between America’s institutions and its Black and Brown citizenry; I couldn’t help thinking that Snowball and his gang of undesirable creatures were a visual representation of mainstream America’s view of all things BlackLivesMatter.

Maybe I’m reading too much into this. Maybe I’m not. 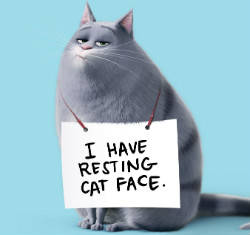 There is a scene in the movie when Snowball addresses his assembly of thug animals that froze me in my cushioned and reclined seat. In this scene, Snowball and some of his henchmen explain how they arrived at their position as the undesirables of pet society.

It is nearly impossible to hear the lines that follow and not think about the millions of Americans who have been thrown out of the speeding car of globalization, and feel like roadkill on the shoulder of the American economic highway.

We now have scientific data showing that death rates for middle-aged, White Americans are on the rise. We have seen the current use of heroin and pain-killer medications in rural communities replace the use of crack cocaine in urban communities during the 1980s as the face of drug addiction in America. 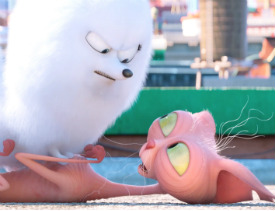 There are many, many people in our country who feel like the characters in this movie. They’re fighting to save their friends from getting snatched up by the wrong crowd. They’re fighting to remain free in the midst of a system that is trying to capture and cage them in the name of safety and order.

Here’s hoping their lives will not be lived in secret.