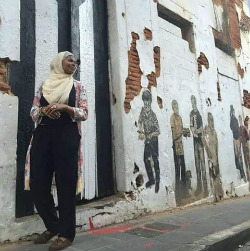 Salihah is from New York City, and was a graduate school student living in the Bronx at the time of her interview. Her days were spent, “[at] school and work…that’s pretty much how I’ve been spending my time as of late.”

Listen to “Conversation 54 (Salihah)” on Spreaker.

We talked about the perceived hierarchy of New York City’s boroughs, and she shared her feelings about the Bronx:

“Well I personally really don’t partake in the hierarchy business…and part of me feels like I can claim other boroughs too. Even though I’ve lived in the Bronx my whole life, I kind of grew up in Brooklyn.

I have love for other boroughs. I’m not one of those people who are like ‘BX, Boogie Down over everything!’ I don’t do that, but I have love for the Bronx too…it’s all love.”

Salihah explained what kinds of risks she’s taking at this point in her life:

“I think it’s a combination of things. I think it’s stepping outside of my comfort zone and sometimes doing things that might scare me, but also might have a really big payout.

Safety and comfort, that’s ideal. That sounds great…but you’ll never experience anything different if you’re always doing the same thing. I found that I was very complacent, and I didn’t like that feeling. So I started doing things differently.”

She spoke about her journey of personal growth:

“I think at the core, I’m always going to be Salihah – I’ve always been Salihah – but of course I’ve changed so much over the years. In high school there was so much of me that was unsure about the future and what it is that I wanted to do, and there’s even some of that now.

So you never know what to expect. Sometimes you don’t always know if things are going to go according to plan but I definitely think I’ve embraced the unknown a little bit more now that I’ve gotten older and gotten a little bit more secure and confident within myself.

…it’s just like, you know that you are capable of more. You know that there’s more you want to do, so you decide to do it. When I was feeling that way in high school, I still didn’t really do anything about it. I was just like ‘I know there’s more that I could be doing, but…’

But when I was younger, I was really stuck in a place where I cared a lot about what other people thought of me and if I was fitting the image and the role that they had [for me] in their minds. But as you get older, you have to break outside of that and stop worrying so much about how people perceive you to be.” 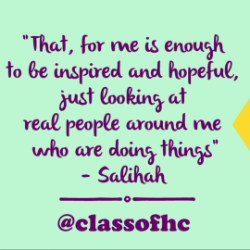 We spoke about the role spirituality plays in her life, and why she said her life priorities haven’t changed much over the years:

“I think the same things matter. But if anything, they just matter more. I’m a pretty simple person, to me the things that were important were my family, my friends, my relationship with God…the older you get, you realize just how important those things are.

…even if you’re not someone who believes in God, I think in some way you’re forced to assess your own spirituality. And I think that just happens because life happens…to me, I’ve always interpreted spirituality to be the way that you interpret and make meaning of the world around you. And for a lot of people like myself, they do that through religion. And you know, there are other people who make sense of the world through other things, and that’s fine.

So I can definitely understand people who are really empathetic and sympathetic towards other people and different things that are going on, but who may not necessarily align themselves with a specific religious group.

And I also think that just kind of having an awareness of other religions – and what other people believe and what’s important to them – I think that’s also a part of spirituality.”

Listen to our full interview with Salihah