Bernadette is from Chicago, Illinois, and was living in the city’s western suburbs at the time of her interview. Her days were spent “advising college students, to build motivation in them, and to try to push them towards something greater in their lives.”

Listen to “Conversation 51 (Bernadette)” on Spreaker.

We talked about the difference between the way she sees Chicago and the way the city has been portrayed by some in the news media:

“I think it’s misrepresented. I think that the information that people are hearing in the media, and that they’re reading about…there is truth to every thing…but that’s only one perspective.

Recently, my husband and I traveled to Ft. Lauderdale and [when asked where we are from], we said, ‘oh we’re from the Chicagoland area.’ And you could see their expression! Like, ‘oh are you okay?!’ And I’m looking at them like, ‘I’m good.

My neighborhood is not what you expect. It’s a quiet neighborhood. I live a normal life. There are not gunshots ranging through my existence. I didn’t grow up with that.

My husband is from Englewood, so he grew up in a different neighborhood than I grew up in, but his experience is still not the experience that you hear on the news. Yes, some of those things happen, but it doesn’t define what his experience was growing up.

So when I hear people say different things – and yes, there’s truth to it – but how much more do you know about it?”

Bernadette described the joy of never paying the full price for things:

“It’s not even in a deep way of trying to prioritize your savings and things. I’m not there yet. It’s just the simple things [like wanting] a new pair of shoes. I refuse to pay full price. I will shop around. I will research to save to get what I want.

And if I can’t find it on sale – or preferably on clearance – I’m not going to get it, ‘cuz that means that it’s not meant to be for me. But sometimes the Lord blesses you and it comes back! Like it was gone, the store told me it was sold out, and I go back and it’s just sitting there at 75% off like yes!”

She explained how the life goals and priorities of her close friends have evolved along with her own over the past few years:

“I think that’s it’s just us maturing and wanting more. Not just wanting something to be in our closet or to drive. But I will say that everybody has their one thing that they are not going to sacrifice expense for.

With me, it’s food. Like if I want to go to this restaurant and I really like their food, I don’t care if I’m spending $50 for dinner, that food is going to be great you know!

So everybody has their one thing. It just can’t be everything…it’s just [about] what’s more meaningful, and what we want to have long-term, that is more important. You can outgrow the clothes. The car can break down, you know. I’d rather pay for good health insurance. Save and pay to have a home that I can pass on. Those things are more important to me than being able to have a bunch of stuff.” 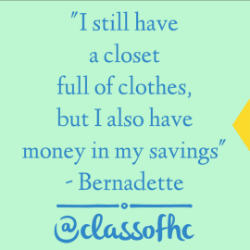 We talked about her journey of personal growth over the past few years:

I’m a big planner. I’ll over-analyze everything. I like to plan out things. That’s me, and that was my approach to everything in life. I had a five-year plan, I had a two-year plan, I knew where I was going to be. It wasn’t goals; it was ‘oh I’m doing this.’

And I have gotten…several different times…that it’s not my plan, it’s God’s plan. ‘Cuz every time I try to plan, it doesn’t always work out that way. So it’s very easy to be so confident and pumped and motivated when things are going your way.

But then when things are not going your way and you’re getting a ‘no’ – not even a ‘no’, but a ‘not now’ – and you still have to find that encouragement within yourself to still set goals; that’s when you’re like okay, this is how life is going to be.”

Bernadette explained why she feels disappointed with much of the national discourse about the social issues in our country, and shared her thoughts about what she would like to see in our public and private conversations:

“You have to be able to have those uncomfortable conversations with someone. Someone who is not necessarily going to agree with you.

And if you can actually be transparent with each other about why you feel that way, and be able to not talk and listen to what the other person has to say, and have a respectable debate about it and maybe hear each other’s points; then you can see some difference.

But everyone just wants to stay and talk to someone who is just going to tell them what they want to hear or back their opinion…and that’s not how we’re going to see any differences.”

Listen to our full interview with Bernadette

Check out some of the organizations that inspire Bernadette: