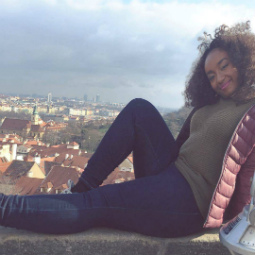 Raven is from Brooklyn, New York. She had recently completed her third year of college in Massachusetts at the time of her interview, and was spending her days “currently…getting adjusted to this 9-to-5 life. I’m interning in [New York City]. I pretty much just go to work, take naps, and try to eat.”

Listen to “Conversation 50 (Raven)” on Spreaker.

We spoke about some of the differences between Boston and New York:

“I don’t think it’s an East Coast rivalry. When people hear that I’m from New York – especially since I go to a business school – everybody’s like, ‘oh I might move to New York.’ ‘Cuz you know, Wall Street and all that other stuff. Corporate life is really in New York. Boston has a big corporate scene…so, people don’t mind New York until it comes to sports. They love their sports in Boston.”

Raven described what her version of perfection looks like:

“My version of perfection is…honestly, I’ve always had this problem where I am a people-pleaser. And so I want everyone to think I’m perfect. I guess my issue is that I don’t allow myself [to be] normal…I’m slowly learning to say forget everyone’s expectations, and as long as I’m satisfied with the person I’m becoming, or the person I am currently, that’s all that really matters.

It’s [okay for me to not] live up to everyone’s expectations, or be what I want to be…but I still feel that pressure sometimes to be perfect, ‘cuz I feel like so many people invested in me. And there’s nothing worse – you know, I’m a business major – than investing and not getting a return.”

She talked about the range of people who have invested in her:

And it’s not like they’re looking for a return on that time, money, or energy. They just did it because they knew I could be something. And at this point, I still don’t know what I can be, or what I should be, that could even…I guess, make up for all of the things people have invested in me.

Raven reflected on her group of friends, and why she feels like they are in a good place:

She talked about the months she spent living, studying, and traveling in Europe:

“I think being abroad restored my sense of adventure. Mainly because, it was nice to wake up one day and not wake up in the same place you were yesterday. That’s kind of what I wanted my life to always be. Not necessarily location, but just mindset…that when I wake up, I’m not the same person I was before. I’ve learned. I’ve grown. I’ve aged…unfortunately!

Whereas a lot of the Black people in Europe – other than like Paris or London – are like immigrants coming from Africa, so there’s a big issue with homelessness, with joblessness…and that could have very easily been me if I wasn’t born in America.

…there were plenty of examples like that. When I [went] into somewhere, and because I was dressed differently from the other people of the Diaspora – the people who had migrated to different parts of Europe – I go into a store and they’d be so respectful and everything.

And then everyone else…I’d be right next to someone else and it would be…weird. They’d act like [the people who had migrated] didn’t have money to spend in their stores too. So I definitely say that to be Black anywhere is to be oppressed, and to be American anywhere is to be privileged.” 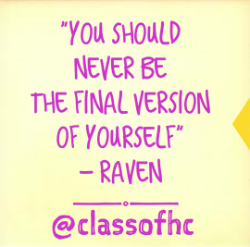 We talked about her path of personal growth over the past few years:

“[Back then], I guess I was a lot more selfish in that I didn’t really care about too much of anything. Just pretty much myself doing what I wanted, making sure I was fly. And I realize now that that’s not what’s important in life.

And a lot of the people that you hold dear to you or close to you are what’s really important. And I didn’t really notice that until losing my dad…that no one is guaranteed in your life.

So, I think that’s the biggest thing I’ve gotten over the past seven years…to always forgive people that you love, people that you don’t love, because no one is always going to be in your life and ultimately, you’ve got to live your life full of not having regrets, not having malice in your heart.

Because your days on this Earth are numbered, so just live your life happily, not angry at anyone. Because at the end of the day, you only have one life to live, and you have to live that to the best of your ability and the happiest you can.”

Listen to our full interview with Raven

Check out some of the organizations that inspire Raven: