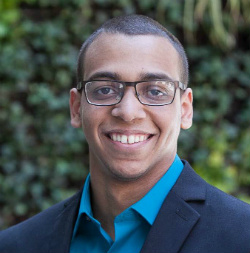 Alberto was born in New York City, raised in Providence, Rhode Island, and spent most of his teenage years in the Dominican Republic. He was beginning his first year as a transfer student at a university in Rhode Island at the time of his interview.

Alberto’s Most Likely To Is: Most Likely to Work Hard Towards Becoming Successful Without Forgetting Exactly Where He Came From

Listen to “Conversation 49 (Alberto)” on Spreaker.

Alberto shared some of his memories from his childhood days in Providence:

“To give you an idea of just what my mindset was…not just my mindset, but my environment…I didn’t even know much about Brown University when I was living in Providence. During my time there, I think I always lived like 10-15 minutes from Brown.

And I never went. I never visited, but that’s not a negative thing. It’s not. It’s not a bad thing, it just shows where I was at the time…for me it was mostly: Go to class, come back home, do homework, play PlayStation. In the summertime I would play little league baseball…and that was basically my routine throughout the year.”

He explained why he believes success is connected to hard work:

“It really has to do with a combination of a couple of things. My family – my mom, my dad, my uncles – everybody who represents my family. People around me. My community. Just my environment, I’ve always seen people work hard. I’ve never had the privilege to be around people who have always had [things] their way, or who always had it easy. For me, I grew up seeing that everything takes hard work.”

We talked about how he earned his GED in two months, enrolled in community college one week later, and fought through the early challenges of college life:

I feel like that’s one thing I wish we could all do…remove standards from things. Like, ‘oh yeah, like five classes is the regular.’ Or ‘oh, this class is an easy course.’

Alberto described the camaraderie he found with the students at his community college:

When you think about the numbers of people who are not going on to be their best selves. For example, like me, the community college student…there’s a very low percentage of minority [students of color] that go to community college [and] graduate, and transfer to a four-year level, and graduate…go out there and just look at the numbers.

And it’s not just to make them successful; a lot of those people have innovative things to share that will make society a better place for all of us.”

Listen to our full interview with Alberto

Check out some of the organizations that inspire Alberto: