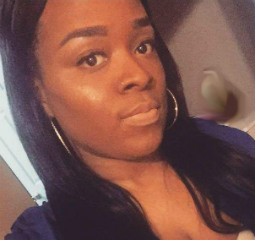 Felice is from Brooklyn, New York and was living in Atlanta, Georgia at the time of her interview. She was spending a lot of her days “trying to make this money.”

Listen to “Conversation 44 (Felice)” on Spreaker.

We talked about the hot-or-cold reception some New Yorkers encounter after moving to the South:

“[For] people from New York in general, or people from up North, it’s kinda like two sides of the spectrum. They either hate us here, or they love us here. You’re going to meet somebody that’s like, ‘Oh you’re from New York?! I love New York, it’s so amazing! Ya’ll are so cool.’

Then you meet somebody that finds out you’re from New York and they go, ‘Oh I hate ya’ll. Ya’ll are so cocky, ya’ll so arrogant.’ And if I say something like ‘coffee’ or ‘sneaker’, then they’re like ‘ugh you’re from there?! No, don’t wanna talk to you!’ And I’m just like, ‘dang, I’m a nice person!'”

She explained what the biggest transition was for her in moving to Atlanta:

“The most interesting part to me about being down South…when you’re from New York, everybody’s kind of all the same, you’re all raised there. And then you come to a place like the South, and you think you’re just being yourself, but you’re sticking out like a sore thumb to people before you even open your mouth.

Just in the way your hair is done, your clothes are done, [the way] you move about your day…people can just tell you’re not from there. And that was the weird thing to get adjusted to, that people can kind of tell that I wasn’t from here before I even did anything.

Now that I’ve been here for a while, I can see it. Now, people from New York stick out to me before I can speak to them too.”

Felice spoke about what being successful means for her:

“To me, I like to define what I see as happiness first, and achieve that. I’m trying to break away from following society’s idea of what I need to be happy, and kind of define it for myself…Because I was always that kid that was always got everything I ever set my eyes on, like ‘That’s mine.’ And then I got to Spelman.

Spelman was like the biggest dream for me. I had wanted to go to Spelman since I was in like 4th grade. When I got in, I kind of had this setback at the end of my senior year when I found out I had to come back for an extra semester. And it hurt me because I was like, ‘This is not a part of my plan!’

That was like a big humbling moment for me, because it was that moment when I had to realize that life doesn’t always go [according to] your plan. And sometimes, you gotta re-evaluate that plan, and look at it differently, and realize that just because it didn’t go the way you wanted it to go doesn’t mean everything else is going to be that way…or that now you can’t achieve what you wanted.”

We talked about the benefits of having a positive social circle:

“I think the dopest part of going to Spelman is that I met a lot of women who are like-minded, and very confident, and very strong-willed, the same way I felt like I was. I think when you put out a certain type of energy; you automatically attract people of like mind.

And I’m very good at weeding out people who I don’t feel are healthy for my mental state and my comfort and confidence. So I’ve been able to build up a certain type of social circle where it’s like they’re achieving so much as well; I’m kind of fighting to make sure I’m keeping up with them.” 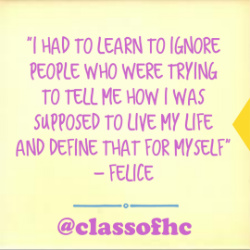 Felice shared some of her experiences growing up with a disability, and the role her parents played in helping her develop a strong sense of self:

“Being born with a disability comes with its own challenges. I feel like people expect that because I have a disability, they’re kind of like surprised that I am confident. But my parents never really raised me to associate who I am as a person with my disability.

My dad always told me that the one thing he made sure he always taught me was how to be self-sufficient. I remember him showing me a home video one time where I was trying to get on a swing. And I was struggling.

And there have been plenty of other types of instances like that where I can remember that it was something I’m sure I could have figured out myself, [but] I tried to reach out to them like, ‘Can you help me?’ And they were always like, ‘No, no.’

And it seemed mean or harsh at the time, but then it got me to the point that as a young girl with disabilities I was able to go all the way 1,000 miles from both my parents to go down south and go to school; because they taught me to learn how to do things my own way.

Maybe what I want other differently-abled (or whatever the case may be) younger people to understand is, I guess, just because you’re different doesn’t mean you can’t have a normal life.”

Listen to our full interview with Felice

Check out some of the organizations that inspire Felice: