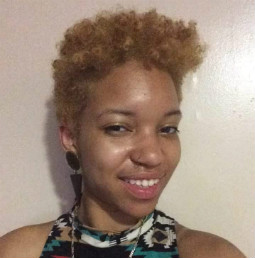 Janelle is from Brooklyn, New York. She was preparing to graduate from college in Washington, D.C. at the time of her interview, and she was spending her days “mostly…I’m going to be completed honest, I’m tired all the time. That’s become a part of my personality.”

Listen to “Conversation 43 (Janelle)” on Spreaker.

Janelle talked about what makes her alma mater, Howard University, a special place:

“I don’t know, it’s just knowing the legacy…and the fact that people knew [about] the legacy for so long. You can watch shows from back in the day like ‘Martin’ or something, and you’ll just see them with the Howard sweatshirt on. Every time I see that, I’m just like, ‘Look, my school! That’s so great.’

Also, just for me, coming on the campus, I just feel like this real, family atmosphere that I didn’t see anywhere else when I was visiting schools before I became a freshman here. That was pretty much it for me. I was like, ‘Wow, this is like family. Everybody looks out for each other. Everybody just has this one shared experience.’ Yeah, that was it for me.”

She spoke about dealing with the “So what are you going to do now?” question that often came up after someone found out that she was about to graduate:

“I wouldn’t say hate, I guess hate is a strong word…but I do not like the conversation where somebody – as soon as they see me – [says], ‘Oh, so you’re about to graduate, what are you about to do?’ Please, I don’t want to talk about it right now…I should just post a YouTube video [like], ‘Hey everyone, just to answer all of your questions…’

We talked about finding communities of like-minded people after graduation, and about the difference between friendships formed in college and the ones formed during her childhood & teenage years:

“In college I feel like you have more people who are goal-oriented, so you kind of know where they’re going even if they still are kind of lost. There are some lost people in college, I won’t lie about that, but people in college are a little more like-minded than people in high school.

So I feel like some friendships drift apart more in high school because…I don’t know, I don’t think it’s on purpose, but we sort of see the friendship or connection as temporary. Whereas in college, it’s like I’m getting my life started; and I need to network and I need to be able to maintain connections.

And then you just have the friends who sort of think like you, so now you’re like ‘okay, these are maybe going to be some long-term friendships.’ So, I don’t know…I think it’s just easier to maintain connections in college than it is in high school or any time before that. I think it’s just the way that we start to think after a while, and our maturity.”

Janelle talked about the evolution in her understanding of the world, and of her personal identity, over the past 7-8 years:

Because even when you get to high school, or middle school, and you walk into a neighborhood…if somebody’s super-drunk, or if somebody’s just that disgusting…where they’ll just say something to a fourteen-year old and you’re like, ‘is he talking to me?!’

But as you get older you’re like: Why is it that now I’m walking down the street and I have to look around and not put headphones in my ear just to make sure somebody’s not following me down the street?! Or I have to worry about if I turn a dude down when he tries to catcall me that he’s not going to call me the b-word after. It’s just a lot that I didn’t realize that I actually had to worry about before.” 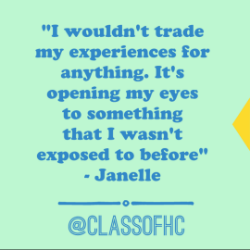 We talked about the phrase “checking my privilege”, and about how social privileges are often different for women with different skin tones with the Black community:

“Well Blackness has always been a thing that hasn’t been very…‘liked’…I’ll say, as a euphemism. The lighter you were, the closer you were to being White. So people just automatically treated you differently, [thinking that] ‘you’re closer to what I am, and so you’re probably a little bit smarter than the darker girl.’

She explained why she wouldn’t trade her life experiences for anything:

“I think it’s just a part of who I am. I would not trade my experience for anything just because I feel like it’s opening my eyes to something that I wasn’t exposed to before…everything that I’ve experienced, I just had a surface-level idea of all of that. But now I’m just like, ‘wow, this is connected to this and this is connected to this…like what?! I feel like I’m learning so much more.

And while it can be irritating sometimes, and frustrating, and make me wanna curse the whole world out…at the same time, I’m like ‘this is interesting.’ This is something that makes me feel like my brain is working in a way that I feel like somebody else’s brain couldn’t be working, if that makes sense. If you just have that surface-level idea of everything, then…I don’t know, it just sounds like a boring life to live.

Even though Black women have this sort of struggle that can’t be compared to anybody else’s…we still stand strong. Yeah we get down-trodden a lot, but at the same time if we’re still standing here, that’s kind of powerful. That’s like a powerful thing to think about.

So yeah, it may be a lot to know all this stuff in our generation, but this is what we have to deal with, and I’m okay with it honestly.”

Listen to our full interview with Janelle

Check out some of the organizations that inspire Janelle: