Chelsea was born in Haiti, grew up in Brooklyn, New York, and was living in Brooklyn at the time of her interview. Her days were spent “working as a college advisor at a nonprofit, reading a lot, meditating, practicing yoga, and trying to find ways to be better and keep myself grounded.”

Listen to “Conversation 39 (Chelsea)” on Spreaker.

Chelsea spoke about her most recent trip to Haiti, and addressed some common misconceptions people have about the country:

“The last time I went to Haiti was about three years ago, so it was definitely after the earthquake. And surprisingly enough I still had an amazing time. When I first got there it was a little bit scary because even the White House [National Palace] in Haiti was still literally divided in half.

You know, the part that was super cool was that when I got there, I expected everyone to kinda still be depressed and down from what happened…but the children were just amazing. So resilient and happy to see me.

And it’s interesting, whenever I’m in Haiti I feel more comfortable…like I can literally wake up and go pick a mango off of the tree…and not worry about where it’s actually coming from.”

We talked about how gentrification has changed the Brooklyn neighborhoods where she grew up:

“Now, the corner store delivers. They have organic food. The buses are running on time. It’s like a completely different environment. They’re opening a bunch of different cafés with Wi-Fi.

…you know Kennedy Fried Chicken? That was probably on every corner in Bed-Stuy. Most of those are gone. [It is] definitely beneficial, because now I can go to the corner store and get decent food…but that says a lot, you know? Why weren’t these places available for us before?”

Chelsea explained the role yoga plays in her life:

“There are a couple things. Of course the basics, like improving flexibility, building strength, improving your posture. But, the reason why I practice…for me yoga is part of my spiritual practice.

Whenever I’m doing yoga, that’s when I can be present. I do it early in the morning because it kinda sets the tone for the day for me. When I’m doing it, I’m kinda just there…I’m centered. I’m allowing myself to just be. I notice that I’m breathing. I’m thankful. It’s one of those things that keeps me grounded.”

She talked about why having “circles of friends” has been good for her social life:

“It’s funny because I have circles for different things. I have a group of people who – if I want to party – those are the people that I contact. If I need emotional support [etc.] I never really cut off people completely, honestly.

I’ll definitely like keep you at a distance – we can still be friends on Facebook – but I definitely don’t believe in just burning bridges. Two of my best friends are from middle school, so that kind of paints a picture for you. I love to stay connected with people…definitely at different distances, but [connected] nonetheless.” 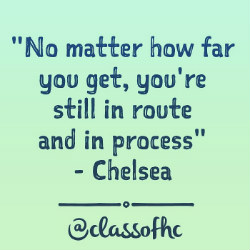 Chelsea reflected on her journey of personal growth:

“[When] I was a freshman in high school…I was hanging out with the wrong crowd, the wrong people. [I was] seeking validation from everyone; and you see how that could be problematic, because you really can’t please everyone, and in an attempt to do so you only end up hurting yourself.

I never went to class. I was basically setting myself up for failure. If you were to ask me about yoga and meditation back then, I really would have looked at you like ‘Are you serious?! Are you really asking me this right now?!’

So I got to this point – part of it was knowing the right people – but the second part was just being open and allowing them to guide me in the right direction. That’s pretty much what made all the difference for me.”

We talked about what she sees as she looks at NYC, and at our country, in this moment:

“One of the biggest things that I see is that people are not really aware of what is going on around them. The lack of focus on mental health issues, especially in the African-American community…I really wonder, why aren’t mental health issues treated? If someone had cancer or diabetes, there is so much more importance placed on that.

I think that your mental health should be just as important. Like, for instance, the people that you see on the train just talking to themselves…or running up to people…and it’s normal. It’s like, ‘oh okay, this person is just crazy, it’s alright.’ But it’s not okay, you know?

Listen to our full interview with Chelsea | Check out Chelsea’s lifestyle and wellness page, @heythatschelsea on Instagram

Check out some of the organizations, people, and ideas that inspire Chelsea: