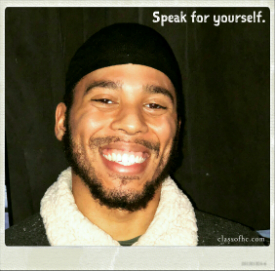 Khalid is from Brooklyn, New York. He was serving as a United States Marine, based in North Carolina, at the time of his interview. His days were spent “either working out, reading books, or going to work.”

Khalid’s Most Likely To Is: Most Likely to Get Out of the Military in a Few Months and Start School

Listen to “Conversation 36 (Khalid)” on Spreaker.

Khalid explained why the tough-guy image of a Marine does not conflict with his desire to enter the medical or nursing profession:

Going to the Marines has given me a stronger sense of purpose and discipline, but it’s not like I’m always this hard-charging, roaring guy…I’m still me.”

We talked about some of the unique bonding experiences he went through while in boot camp:

I [would] have to find somebody that’s in my group, wake them up, and be like, ‘yo man, I gotta go to the bathroom.’ And the guy’s like, ‘alright, let’s go.’ So he would get up from his sleep to walk with me all the way to the bathroom, I’d do my do and then come back…That’s what they train you for, to always be together as a team.”

Khalid explained the difference between coming home during his first year in the Marines, and coming home now in his final year:

“When I come back [to New York] I usually grow out my beard and let my hair grow and stuff, because I’m not allowed to have it when I’m on duty. I take off my uniform and everything, so you wouldn’t really know I was in the military unless I broadcast it. Which when I first started, that’s what I did. I went back to my high school in my dress blues; I walked down the street in my uniform or whatever. [Now that] I’ve been in the military for a little bit, I just try to be low-key.” 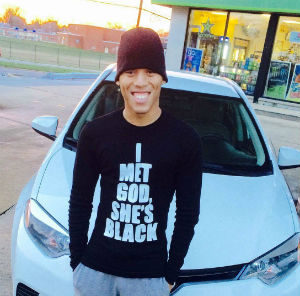 We talked about what it was like to have been serving in the military while so many justice and protest movements were taking place around the country:

“It’s like a security blanket in a way…when the protesters in BlackLivesMatter and everything was going on in New York with the protests; I was either here, or I was doing training. So it was like I was watching it from a TV screen. And looking back, I wish I was there in the protests and everything…because looking at it from a TV screen, you don’t feel the same emotions that you would if you were actually there protesting.”

Khalid shared his approach to balancing his military identity with his personal one:

“The uniform comes off at the end of the day. They say, ‘yes but you’re a Marine.’ But I was somebody before I was in the military…I try to remember who I am because I won’t always be a Marine. Eventually – really soon – I’ll be Khalid again.

So I try not to forget who I am and where I came from because a lot of people that came from where they were into the military… [made] a whole [180°] change, like they’re not even recognizable…Yes, it is a good look I guess to be where I am now, but I still remember who I am and I still put that first.”

Listen to our full interview with Khalid