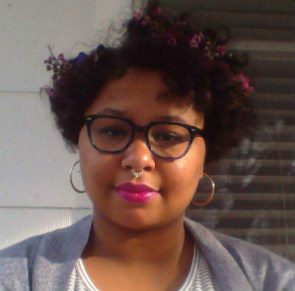 Rima is from Brooklyn, New York and was living in Norfolk, Virginia at the time of her interview. She spent her days “on YouTube…but outside of that, I read.”

Listen to “Conversation 25 (Rima)” on Spreaker.

Rima talked about the types of books she likes to read:

“Mostly fiction. Right now I’m in this habit of starting a book, getting mostly through it and then stopping. So I have a stack of books that I’m like, ‘oh I’ll finish these eventually.’

Right now, I’m reading The Secret History by Donna Tartt. The book is a step up from YA [Young Adult] fiction in a way, because it doesn’t revolve around 16 year olds. It’s [about] college kids…which is something that you don’t actually find too much right now. Either you’re YA fiction, or you’re straight up James Patterson.”

We talked about some of the people Rima follows on social media:

“There’s Malika, who went to [high school] with me. She’s always alert to the issues and things, and she always has something out there alerting everyone else… and [she] has actually been like that for a very long time.

Even when I started following her on Tumblr when I was in 10th grade, she was always alert. And she was always really nice to me, that was another thing.”

My mom was more involved, and one of her friends was teaching me as well. So I had more of a schedule then. But for 9th grade it wasn’t so much so. I was a little more expected to go out there and take it head on, as someone would [who] was going to college.”

Rima described some memories from the childhood years she spent living in Senegal:

“Well I lived in Kaolack, which is like a region. I think there are four regions within the country; Kaolack is its own region. And I lived in a small village. I mean, it wasn’t like grass huts and things like that, but it was small.

I was a kid, so there was this whole freedom thing that at nine years old you don’t have in America. My curfew was 10 o’clock at night. It was really just a calm environment, there wasn’t too much going on…and when something was going on, you’d know. Everyone was talking about it. Word really traveled fast.”

“One thing that’s kind of different is the way you handle your problems. So, over there, when you first get there you’re automatically going to stand out.

You’re already an American kid, and [with me being] incredibly light-skinned – they constantly called me white – you stand out. So there you’ll get picked on, people will curse at you, it’s whatever…until you kinda put your foot down like, ‘look we could go hand-to-hand combat right now!’

That’s the only option, whereas in the [United] States if you go hand-to-hand combat with somebody, it’s ‘whoa, what’s wrong with her?!’” 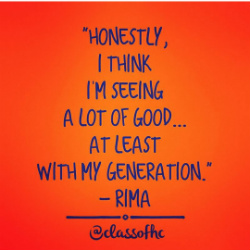 We talked about her path of growth and maturity over the past few years:

“Then I don’t think I cared much about anything. Especially when I lived abroad, I was kinda like, ‘I’m carefree. I have no worries. There’s nothing to worry about.’ But now, I guess I care more about what’s going on around me.

Just in the world in general, all the issues we’re dealing with here in the [United] States as far as race, religion, feminism, sexism and misogyny and so forth and so on… all those things play a bigger role now for me.”

Rima talked about what she sees in her generation:

“Honestly, I think I’m seeing a lot of good… at least with my generation. In spite of us constantly getting the ‘your generation is lazy, you guys don’t work for anything, you don’t want anything in life, you just want it to be quick and easy.’

I don’t think that’s really the case. I think we have more opportunities to make things slightly more quick and easy, but even those things that seem quick and easy prove to be a lot of hard work.”

Listen to our full interview with Rima