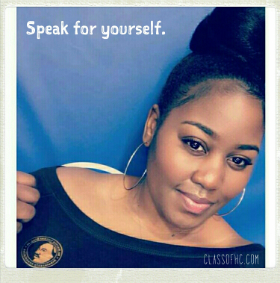 Krystal is from Brooklyn, New York. At the time of her interview, she had recently graduated from college, was living in the Bronx, and spent her days “adjusting to being a grown up.”

Listen to “Conversation 1 (Krystal)” on Spreaker.

We talked about her memories of moving from the concrete of the Bronx to the “bikes, roller skates, trees, and grass” of her childhood days in Maryland, and about the realities of life after college:

“You know, when you’re in high school, people think of ‘Most Improved’ as [dealing with] school and things like that…but I would say most improved in terms of life. Knowing who [I am], and knowing where I want to go…just having a vision, basically.”

Krystal explained why she doesn’t think she follows anyone “too important”:

“I’m speaking more so [about] celebrities…because I feel like the things that celebrities put up on social media and things like that…are very superficial, like a jar of new makeup…or this body…blah, blah, blah. It’s nothing…you know…substantial…that’s why I say that. I’m not talking about regular people. I actually value what people I know – and regular people that I follow – say…and their posts on life, and their perspectives of things, more than I value someone with thousands of followers.”

We talked about her days growing up as a “normal girl” in New York City:

“When you say ‘Brooklyn’, they just assume that you grew up on the block with Biggie Smalls, and you live in the projects…I lived on a nice, small block. It actually looked like The Cosby Show. I’ve never had to dodge bullets, I was never running from the cops…and on the same token, I was never club-hopping with fake IDs and drinking martinis and doing all this fabulous stuff.”

Krystal shared some of the life lessons she’s learned along the way:

“I think that something not only me, but a lot of people my age, struggle with is commitment. We say that we want to do this…and we want to help people…but we never pick one thing to be committed to. So it took me…I would say a long time…to figure out that you have to commit to something, or you’re doing nothing.” 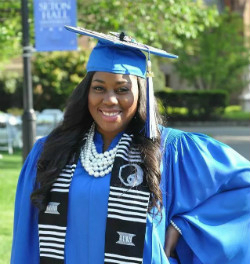 She reflected on the importance of being appreciative and loyal to those who supported you in the past:

“I feel like that’s one of the worst things to see…is people that you saw start from nothing. They had the greatest support system and everyone pushed them…and as soon as they feel as if they’re reaching their goal, or they’re getting to their goal…it’s like ‘Deuces, that’s it. I don’t need you as a friend anymore. I don’t have to talk to you anymore. You’re not on my pay grade.’ It’s ridiculous…especially when you get to this level.”

We finished our conversation by talking about Krystal’s vision for the country, and for her city:

“When does it get to that point where we have to discredit another cause, or another group of people, or something like that because it doesn’t affect you…but in the next note you will say, ‘we need to bond together. We need to unite. We need to be as one people.’ It’s way too contradicting.”

“I want to see accountability. I feel like that’s something that is very hard to get to…and to take ownership [of]…because it’s so much easier just to point the finger and blame this, or blame that…but until people…individually, holistically…all of it…take accountability for where the world is now, we can’t move on. You have to learn from the past, and in learning from the past, you have to be able to accept the present.”

Listen to our full interview with Krystal

Check out some of the organizations that inspire Krystal: