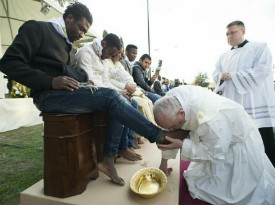 This is the second in a series of posts in which I try to understand what’s going on in our country right now.You can read Part 1 here.

Of all the photos featuring colorful hats, bright pastels, fashionable toddlers, and family dinners that filled my timelines and news feeds during the Easter Week festivities a couple of weeks ago; there is one image I will not forget:

While the symbolic ritual of feet-washing during Easter Week is nearly as old as the Christian faith itself; in this current chapter of religious life in the U.S. it is extremely rare to see any prominent religious figure cross the boundaries of race, class, and religion the way Pope Francis did in that moment.

As I stared at this image of the Pope kneeling, washing, and kissing the feet of a young Muslim refugee who appears to be of African heritage, a stream of questions rushed to mind: 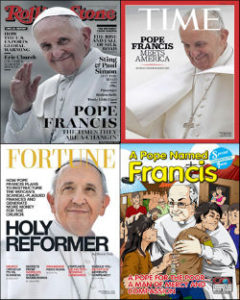 I ask this question to us  – the American public – because I am still trying to figure out what to make of our fascination with the words and deeds of this singular man.

We live in a country where a good portion (43% of self-identified Republicans, 29% of independents, 15% of Democrats) of the population still believes our current president is Muslim.

After nearly a decade on the national stage. After nearly eight years in the most prominent job on the planet.

Numbers like that tell me that there remains a sizable portion of the American public who still see President Obama as someone fundamentally “other” and different from themselves. And judging by the rhetoric that has helped certain candidates’ poll numbers in this year’s presidential primary campaigns, it appears as if many Americans also equate the word ‘Muslim’ with “foreign threat”, even though most have never encountered either in real life. 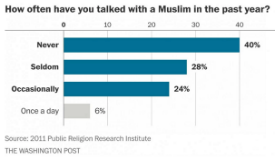 So why do photos like the one of the Pope kissing the feet of a refugee get such traction in the U.S.? What are we trying to say about ourselves in our admiration for his persona?

In my opinion, the reason Pope Francis has captured the affection of the mainstream American media – along with a good portion of the American public’s imagination – is because he is a powerful man who has chosen to use his power and influence to engage and uplift the weak and the forgotten. I think we are fascinated because he does not have to use his power this way. 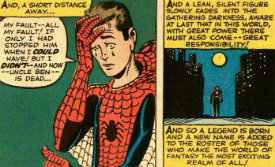 Those of us who are fans of the Spiderman comic books, TV shows, and/or movies are familiar with this formative scene in young Peter Parker’s life. Those of us who are members of the Christian faith see the parallels between his uncle’s words and a famous verse in the Bible. 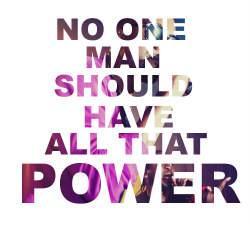 The events of this election season are forcing us to consider what the purpose and function of power should be in a civilized society:

It is not our applause for the Pope or the other saint-like individuals among us – but our individual and collective responses to the questions above – that will ultimately determine the true nature and quality of our country.